This page is an overview of .NET memory management. It should give you enough information about how .NET allocates objects into memory to start using ANTS Memory Profiler.

Small objects are stored in the small object heaps.

This leaves the Gen 0 heap empty, ready for new objects to be allocated on it.

When the Gen 1 heap becomes full, the garbage collector runs again. This time it:

If, after a full garbage collection, not enough memory has been freed to allocate new objects, an OutOfMemory exception is thrown.

Note that the garbage collector always compacts the small object heaps, moving objects that are still in use into the space left by objects that have been removed. This means that the free space is used efficiently.

This generational approach means that recently-allocated objects will be disposed sooner than older objects, which are presumed to be being kept in memory for a reason. It also means that full garbage collections, which have the greatest impact on an application's performance, happen as infrequently as possible.

ANTS Memory Profiler triggers a garbage collection when you take a snapshot. This is because some of the memory counters that ANTS Memory Profiler obtains from Windows are only accurate immediately after a garbage collection. This means you generally won't see any objects on the Gen 0 heap during profiling. This behavior doesn't affect the profiling results, because an object which only exists on Gen 0, and which never survives to Gen 1, will never cause a .NET memory problem.

If you do see objects on the Gen 0 heap, it's because the .NET garbage collector doesn't always behave in the way described in this simplified overview. For example, pinned objects, objects on the finalizer queue and objects created during the garbage collection might remain on the Gen 0 heap after a snapshot. Again, this is never a problem that would affect the profiling results.

Large objects are stored on the large object heap. 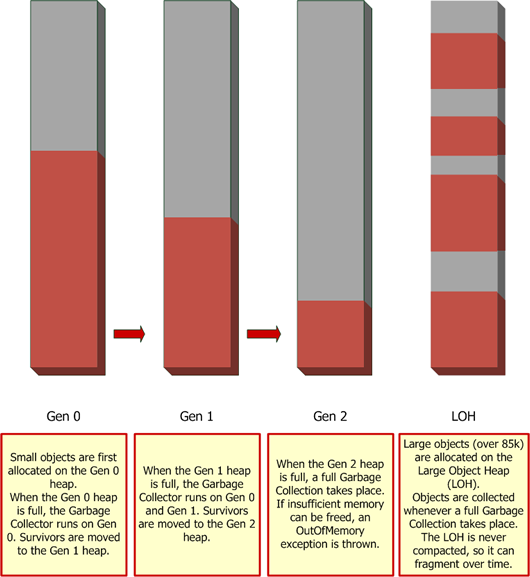 If you're using .NET 4.5.1, you can choose to compact the large object heap. See GCSettings.LargeObjectHeapCompactionMode Property (MSDN) for more details.

The garbage collector calculates whether or not an object can be disposed from one of the heaps by creating a graph (similar to the Instance Retention Graph in ANTS Memory Profiler), which shows how the object is referenced by other objects.

The graph starts from the GC roots. A GC root can be any storage slot to which the running program has access, such as a local variable, static variables, or even a CPU register. (Strictly speaking, the object itself is not the GC root; the storage slot that holds the reference to the object is the GC root.)

The GC roots will reference objects, which in turn typically reference other objects (through a member variable). If an object is not being referenced by anything, it cannot be reached by your program, and will be removed by the garbage collector.

In the graph above, System.String is referenced by:

Because references hold objects in memory, you have to be careful to ensure that references to objects are removed when no longer needed. A common mistake, for example, is to leave an event handler (such as a timer) referencing an object. This will stop the garbage collector from disposing the object. The result is that an object which should have been in memory only briefly can end up leaked onto the Gen 2 heap. Importantly, in this scenario, all of the objects that the object references will also be on the Gen 2 heap. This has significant implications on how you use ANTS Memory Profiler: the objects referenced by the leaked object will often be more obvious than the leaked object itself, so you need to start by investigating those referenced objects (which are most commonly strings or byte arrays).

The typical symptom of a memory leak is that the performance degrades while the program runs but the amount of memory used recovers on restart and then degrades again.

You can also look for .NET classes which have a large amount of unmanaged memory associated with them, or look for objects on the finalizer queue that have not been disposed.

This page should have given you enough knowledge to start using ANTS Memory Profiler. If you are interested in learning about .NET memory in more detail, see our webinar 5 Misconceptions about .NET Memory Management.