The summary page shows an overview of how your application was using memory when you took the current and baseline snapshots.

The summary page is divided into six areas:

Use this information to check how memory usage has changed between the snapshots. To change the snapshots being compared, under the timeline, use the Snapshot and Current drop-down lists. You can name the snapshots; see The timeline.

Click to read more about the memory fragmentation section...

The memory fragmentation section shows information about the fragments in all of the memory allocated to .NET:

If you're new to memory profiling, we recommend you start by checking for large object heap fragmentation.

If you're profiling an application with more than one process

The .NET heaps and garbage collector exist per process, and so it would be meaningless to analyze fragmentation across multiple processes. Use the Process dropdown menu to choose the process to display fragmentation for. It isn't displayed if your application only has one process.

A process followed by an exclamation mark (!) after its name was not running when the current snapshot was taken (either because it had already finished, or because it had not yet started).

Assemblies loaded in the CLR

This section is only shown in ANTS Memory Profiler 8.2 and later. It's not available for .NET 2, or when attaching to a process.

If you want to see the assemblies loaded in a .NET 2 application, see Forcing your application to use .NET 4. 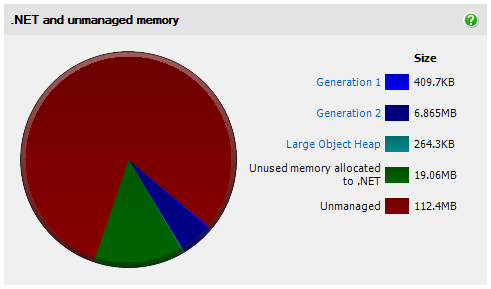 This pie chart shows the memory used by your program when the current snapshot was taken. If you do not have large object heap fragmentation, use this pie chart to identify whether your problem is caused by an unmanaged or a managed memory problem. 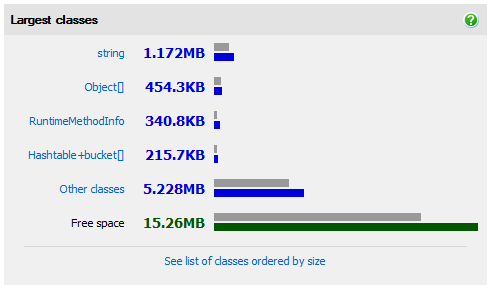 This section shows which classes are using the most memory. Click on a class name to see the instance categorizer for that class.

After you've determined that you have a managed memory problem, and if you aren't sure which class is causing the problem, we recommend you investigate the largest classes. For more information, see Finding out what is using most memory.

This section is only shown if you select Profile unmanaged memory allocations when setting up the profiling session. It's not available on Windows XP / Server 2003 and earlier, or when profiling .NET 1.1 applications. 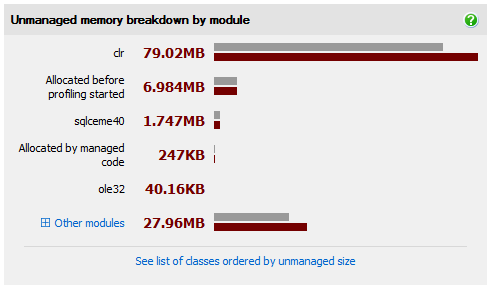 This section shows which modules used by your application allocated the most unmanaged memory, in the current and the baseline snapshot.

Technically, all unmanaged and managed allocations are made by kernel32.dll. ANTS Memory Profiler looks further up the stack trace to find a module that's more relevant to your code, such as a third party library you're using.

Move the mouse over a module to see its full name. Click Other modules to see all the modules.

If you're not using much unmanaged memory, the biggest module is likely to be clr or mscorworks, which is the .NET Common Language Runtime.

Look for modules which:

Two other types of allocation are shown on the chart: