By default, any time you make a change to a stored procedure, function or view, ReadyRoll will generate a new incremental migration when you import that change into your database project.

ReadyRoll also supports scripting these Programmable Objects to individual T-SQL scripts. This allows you to source control each of your database objects. Changes to these objects can be branched, merged and annotated.

How do Programmable Object scripts work?

When you enable Programmable Objects, ReadyRoll will initialize your project by extracting all of the supported objects (shown below) from your schema into individual script files. These files are re-runnable (idempotent) because they contain a header to replace the entire programmable object – "IF EXISTS THEN DROP / CREATE PROCEDURE".

The following types of programmable objects are supported for automated script generation:

In addition to scripting the objects themselves, ReadyRoll will also include the following statements in your programmable object files:

If you'd like to deploy other types of objects not listed here, you can add your own idempotent (re-runnable) scripts by including an Additional Scripts folder in your project.

Please note that table triggers are not currently supported for automatic script generation: after enabling the Programmable Objects feature, table trigger objects will continue to be scripted as numerically-ordered Migration scripts, rather than as individual object script files.

If you've used SQL Server Data Tools (SSDT) database projects before, the file layout that ReadyRoll creates for programmable objects may look familiar (see the below section for a screenshot of the ReadyRoll layout). The primary difference that the files within the Programmable Objects folder of a ReadyRoll project contain imperative logic, as opposed to the declarative logic of SSDT. This means that whatever T-SQL you put into these files will be executed in an unaltered way each time you make a change to the file.

If you are working with an existing database, you will first need to import existing programmable objects to individual script files within your ReadyRoll database project.

To perform this one-off step, start by enabling Import into separate script files and select Import all Programmable Objects in Project Settings.

Then confirm “Yes” to proceed with importing existing database objects into the project for offline editing.

When the import is complete, the ReadyRoll tool-window will create a script for each of the programmable objects within your database: 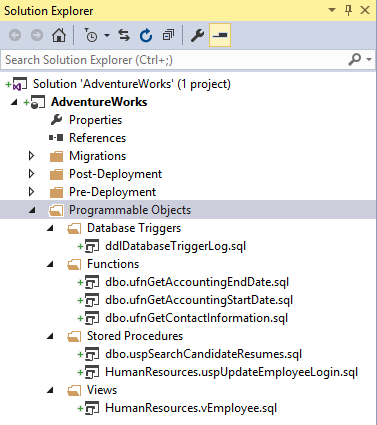 We recommend allowing ReadyRoll to add Programmable Objects automatically using the Import and Generate Script command (which can be found within the ReadyRoll tool-window). 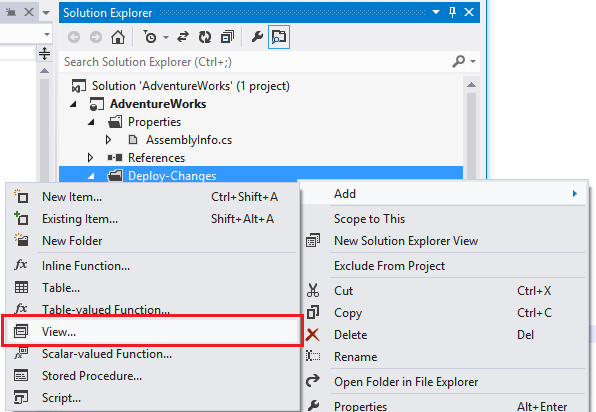 In each of the imported migrations, you’ll notice that the script appears as “Marked as Deployed”, just like an incremental migration.

The difference being that, if we edit a programmable object, we are notified that the script will be executed again:

Deploying the project within Visual Studio, or indeed deploying from a third-party tool like Octopus Deploy or TeamCity, will show the changes being applied:

After making these changes, you switch back to Visual Studio and click Refresh within the ReadyRoll tool-window. You are then presented with both the table change and function change as pending import: 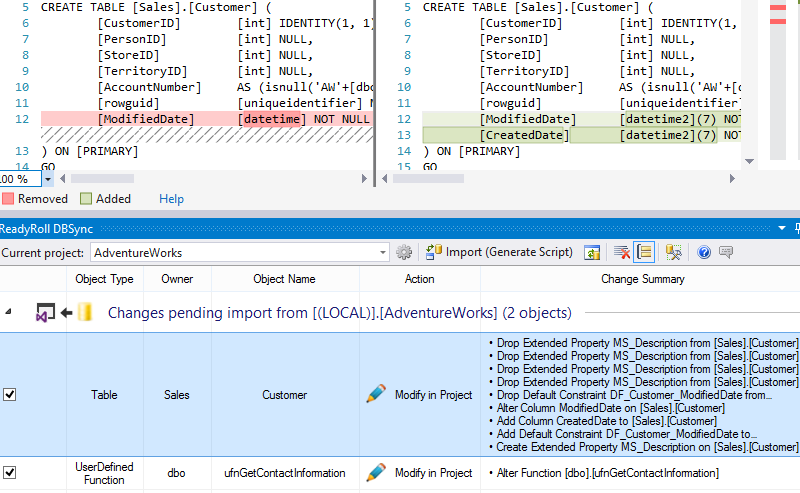 If you import both objects, the following changes will be made to your project: 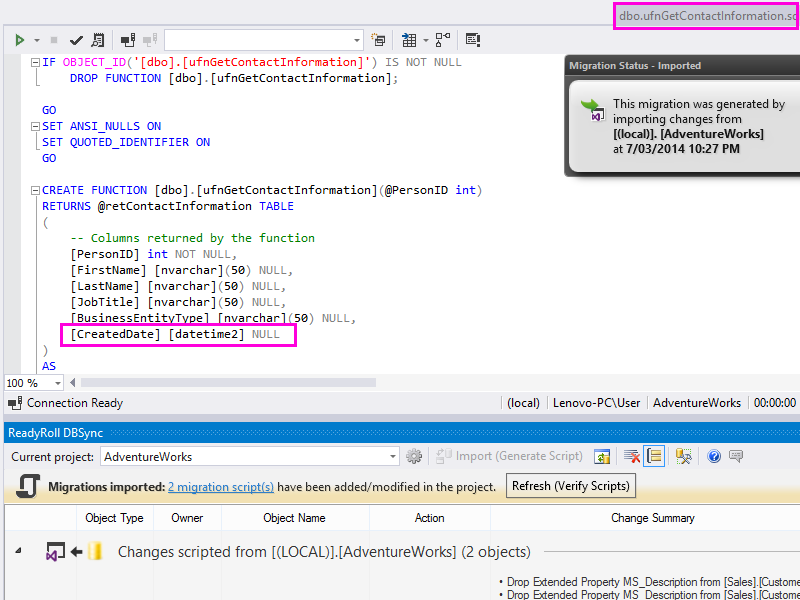 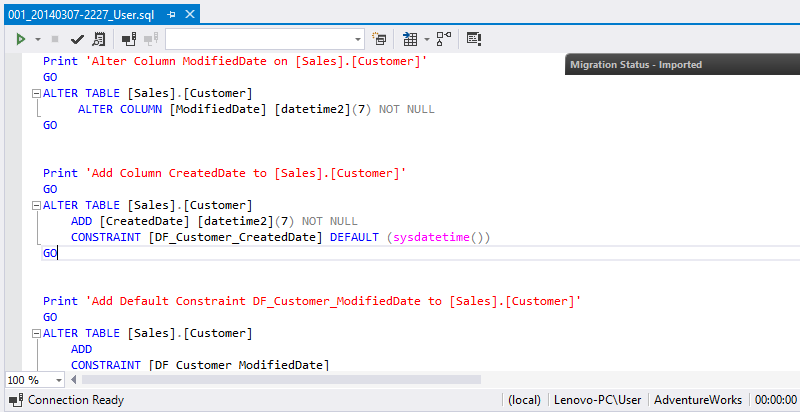 After importing, click Refresh (Verify Scripts) to execute the migration scripts against the Shadow database. If successful, the tool-window will update, indicating that the project is now in-sync with the target database.

We recommend importing your changes prior to updating from source control, in case merge conflicts need to be resolved in any of your programmable objects.

If you do happen to update prior to synchronizing with your project, ReadyRoll will force you to deploy your project in Visual Studio first to protect the integrity of your source controlled code. This may mean the loss of work-in-progress changes in your target database.

Programmable Objects are updated after all incremental migrations have been applied. This means you can couple a table change (eg. adding of a column) and the associated procedure change in the one deployment.

If you need to control the specific order that your programmable objects are deployed, this can be set within the Project Properties by dragging and dropping items into the required order:

By default, ReadyRoll groups the objects in the Programmable Objects folder by object type, and prefixes each file with the appropriate schema name (e.g. Stored Procedures\dbo.MyProc.sql). If, however, you would like to also group your object files into schema sub-folders (e.g. Stored Procedures\dbo\MyProc.sql), you can do so with a bit of editing to your database project file.

To group your programmable object scripts by schema, edit your `.sqlproj` file (e.g. in Notepad) and add the following under the root node of the file:

The new folder structure will only apply to new objects that you import using the ReadyRoll tool-window, so unfortunately you will need to move any existing files into the appropriate sub-folders yourself.

After importing your programmable objects, you'll notice that ReadyRoll scripts each of your objects using DROP and CREATE statements. This means that, whenever you deploy your object, the permissions assigned to that object will be reset.

To avoid losing the permissions assigned to your objects in each deployment, ReadyRoll appends GRANT/REVOKE statements to each programmable object script, based on the database environment that you imported the scripts from. This works fine for permissions that are stored in source control, however if you need to control permissions at the object level directly in the target environments, we recommend assigning the permissions via role objects, rather than assigning them at the individual user/group level.

If the assigning of user permissions directly in your databases is unavoidable, then you may prefer to follow a "pure" migrations approach, instead of using programmable objects. This approach, which is the default style of deployment when you create a ReadyRoll project, results in most stored procedure/view/function/etc changes being made using the ALTER statement, which preserves the permission structures between deployments.

The reason for the difference in scripting behavior between migrations (ALTER) and programmable objects (DROP/CREATE) is to ensure that the programmable object scripts are idempotent; since those scripts may be executed many times, using alter might leave behind some state in the database, so it's safest to recreate the object with each deployment.