Worked example - using a scripts folder as a data source

This worked example demonstrates the use of a scripts folder when comparing and deploying databases. A scripts folder contains SQL script files representing a database's structure and, optionally, data.

You can follow the example on your own system, if you are using SQL Compare Professional edition. You will need access to a SQL Server to do this.

If you have not already followed the Comparing and deploying two databases worked example, you are recommended to do so before starting this worked example.

This example has four steps:

You can only compare scripts folders if you are using SQL Compare Professional Edition.

1. Set up the databases

To create these databases on your SQL Server:

2. Set up the comparison

Creating a scripts folder before deployment preserves the current state of the production database. It can be checked into source control, providing history and allowing you to revert any changes.

To do this, set up a comparison project:

The comparison results are displayed in the main window:

To update the production database, you must create a deployment script. Verify that all the objects you want to modify are present in the comparison results, and select them for deployment.

To search for objects, type the search text in the Find box. SQL Compare searches object names and owner names.

In this example, search for all objects that contain "price" by typing price in the Find box.

The objects are now grouped by whether they match or do not match the find text. To clear the Find box, click the

button; all the objects are displayed.

You can view a side-by-side, color-coded listing of the differences in the object creation scripts, by clicking an object. For example, if you click the Sprockets table, you can see the differences for this table:

For full details of how to use the comparison results window, see:

In this example we will deploy all objects.

In the central column of the upper (Results) pane, select the top level check box to include all objects in the deployment: 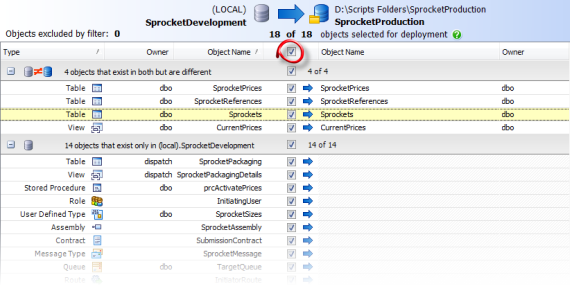 When you have selected the objects to deploy, click

When a scripts folder is the target, you can:

In this example, we will create a deployment script. The script can then be run on the production database to update it with the development changes. 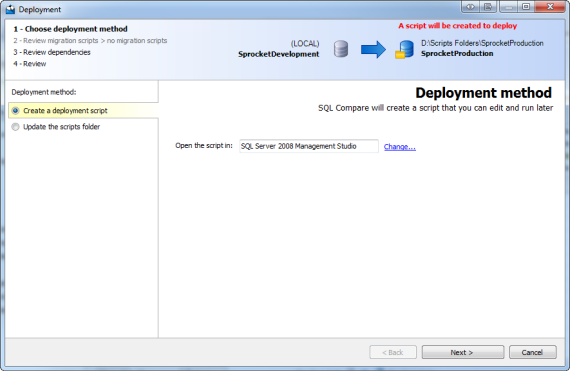 When you have reviewed the script, you can open it in your SQL editor, or save a copy of the script.