A scripts folder is a set of object creation scripts representing a database's schema and (optionally) data.

An object creation script file is created for each object, and different object types are stored within subfolders you can specify.

You can use scripts folders:

You can create and compare scripts folders only if you are using SQL Compare Professional Edition.

Alternatively, on the Project Configuration dialog box, select Source Control as one of the data sources, then select Scripts folder, and then click Create Schema Scripts: 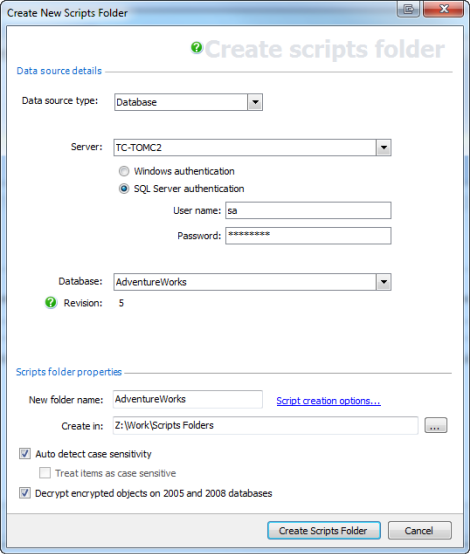 By default, SQL Compare decrypts text objects in SQL Server 2008 and SQL Server 2005 databases that were created using the WITH ENCRYPTION option. When comparing large databases, selecting this option can result in slower performance.

You can customize the folder structure and character encoding of the scripts folder. To do this, click Scripts creation options. The Edit Scripts Creation Options dialog box is displayed, allowing you to specify the directories in which your database objects and static data are saved.