Working with an existing database

SQL Change Automation's initial setup wizard is designed to help you develop and deploy changes to an existing database with ease.

This page provides information on how to do this by creating a baseline schema from an existing database. 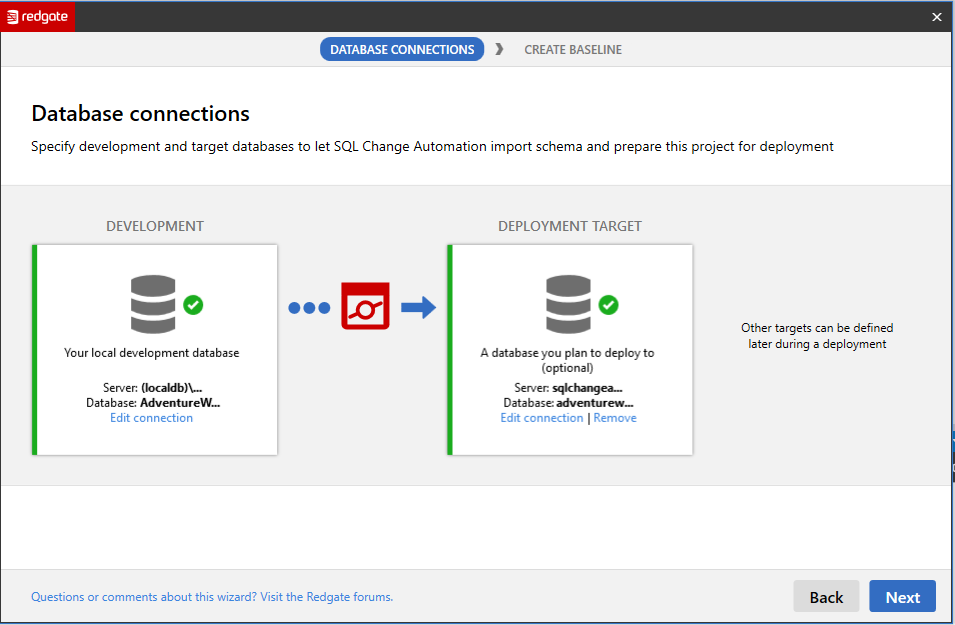 Step through the wizard to specify a sandbox development environment in the area marked Development. You can specify an existing database, or allow SQL Change Automation to create an empty one for you by selecting Create a New Database.

Continue through the wizard to the final page and click the Create Baseline button. This will cause SQL Change Automation to do the following:

You're now ready to make changes to your database schema.

In order to start making changes, you must synchronize your SQL Change Automation project with Development and the Deployment Target.

If Development is empty this is simple – just click the Deploy Project button to deploy the baseline script to Development. This will make Development an exact representation of the schema on your Deployment Target.

If Development has changes that are not on your Deployment Target, you'll need to import these changes into your SQL Change Automation project. Click Refresh from the toolbar of the SQL Change Automation window. This scans the connected database for objects that are pending import. You will be able to review the objects that will be imported beforehand. It may be necessary to revert some changes – for instance if your development environment is behind your production environment. In this case you can right click the change and select Revert from the menu.

After clicking Import your schema will be imported into 1.1.0-Changes as a migration script.

You will be able to deploy your tables, views, procedures etc to a new database, however it will not include any data.

For information on how to populate your database with real-world data, including reference, lookup, or static data, see Data Population.

You can also manually add migration scripts to the baseline folder. This is useful if your target database contains changes that could not be imported as part of the baselining process, such as static data.

Preparing the SQL Change Automation project for your first deployment

What happens when you Import directly from Production

If you specified your Production environment as the Deployment Target, then your database is already set up for the first deployment: no further action is needed, as your production environment was already populated with the required migration log records when you clicked Import. Once you've authored some new migrations, you'll be ready to perform your first deployment.

If you plan to use the Mark all Programmable Objects/additional scripts as deployed when setting the baseline option, it is highly recommended that you do not make any changes to the logic contained within your Programmable Objects prior to the initial deployment to an existing database. This is because any changes to the object scripts will not be applied in the first deployment; the deployment of the object will only occur once a further change to the script files is made and subsequently deployed.

If you do need to make logic changes to a programmable object as part of your first deployment, copy the contents of the affected object and paste it into a new migration, e.g. Migrations/1.1.0-NewChanges/001_Alter-MyProc.sql.

Deploying your changes to production

SQL Change Automation supports several deployment mechanisms. You can learn more about these on the Automating database changes documentation page.