Go to the Licensing page by doing one of the following:

When a successful activation has been confirmed, details are displayed in the My serial numbers table: 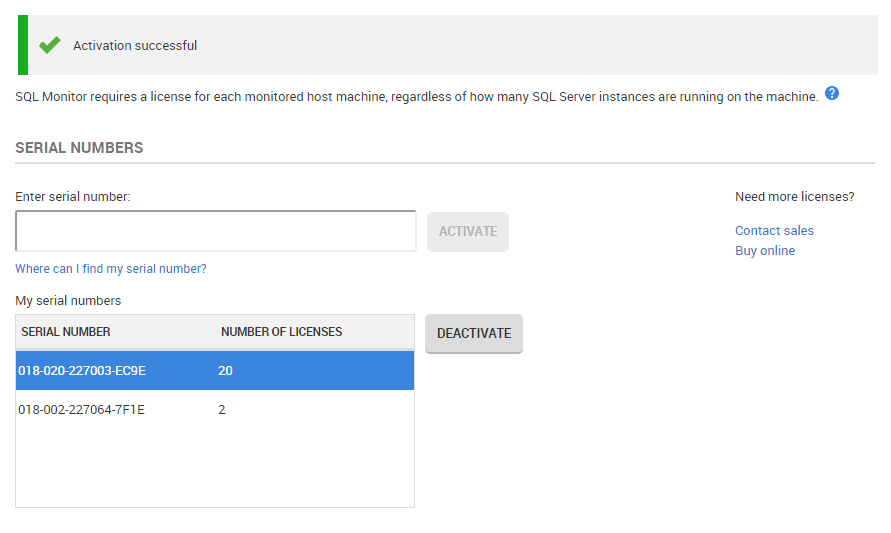 If the serial number cannot be activated, a message is displayed explaining the nature of the problem. You may need to contact Red Gate for further assistance.

SQL Monitor detects the number of servers currently being monitored and allocates available licenses to them automatically. These are displayed in the Licensed servers list. If during your evaluation you were monitoring more servers than you purchased licenses for, or you subsequently add more servers to monitor than you have licenses available, the servers added most recently will not be allocated licenses. These are displayed in the Unlicensed servers list. Unlicensed servers are not removed from the Monitored Servers list, but they will not be monitored and alerts cannot be raised on them.

You can change which servers have licenses allocated to them using the < License and Unlicense > buttons to move selected servers from one list to the other.

In the example below, 22 licenses have been purchased and allocated to the four servers currently being monitored. There are 18 spare licenses available. 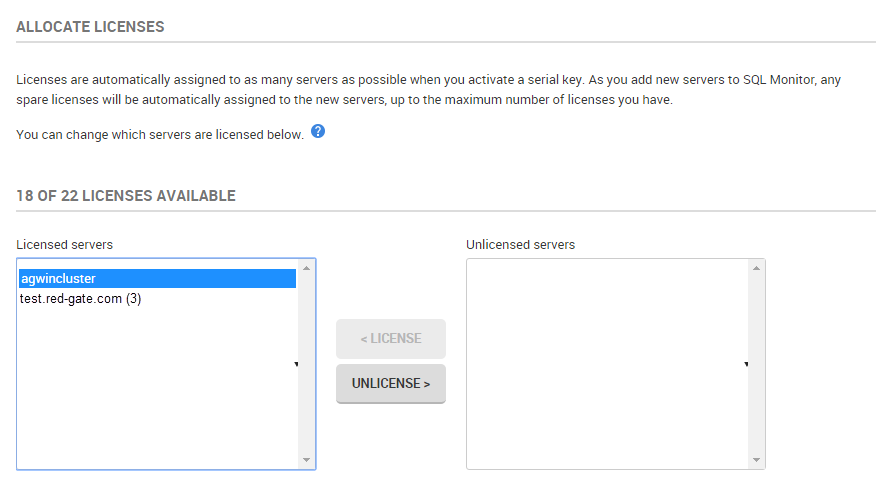 You may need to deactivate a serial number if:

To deactivate a serial number

SQL Monitor contacts the Redgate licensing server, and the serial number is removed from the list:

If there is a problem deactivating, a message is displayed explaining the nature of the problem. You may need to contact Red Gate for further assistance.

What happens when I deactivate a serial number?

The relevant number of servers are automatically moved from Licensed servers to Unlicensed servers. For example, if your serial number was for 10 licenses, then 10 servers will be unlicensed.

If you have licensed your servers using several serial numbers, you may have more licensed servers than are being removed. In this case, SQL Monitor removes the oldest servers first (those that were added to SQL Monitor first).

If all your servers are now unlicensed, SQL Monitor displays a warning banner:

No further monitoring data will be collected, and no new alerts will be raised, until you enter a serial number.