We're planning to release an update to SQL Search around the end of April 2014. In preparation for the release, we've created a beta mailing list for those who would like try early releases. You can sign up for the beta list here.

If you have feedback on the beta, please email the team.

Since our third beta, we've added a load of new functionality to SQL Search, which we’re pleased to release in the fourth, and final, beta of SQL Search 2.

The new features in this beta include:

If you can't see the SQL Search button after installing the beta, check that the Redgate toolbar is set to visible by right-clicking in the toolbar area: 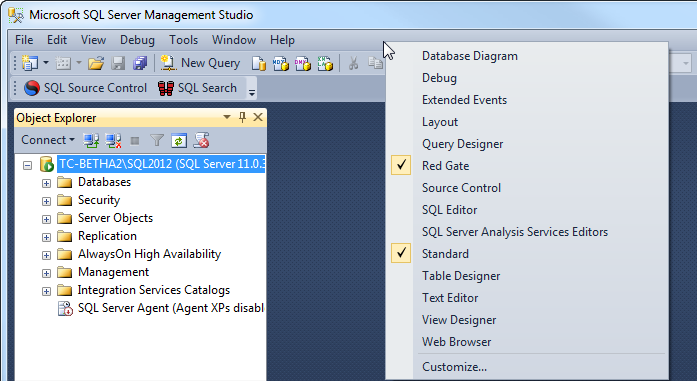 A small update to the second beta release to address performance issues when clicking on the object explorer.

The second release contains some new features. SQL Search now enables you to:

We've made major changes to how SQL Search is loaded into SSMS, which should make SQL Search easier for us to maintain. This first beta is primarily to test that upgrading to this new loader works smoothly.