Over time, your SQL Change Automation project may fill up with a large number of scripts from different releases.

Organizing your migrations into smaller groups makes your project easier to navigate as it scales.

By default, migrations are grouped by file path. If you wish to change that:

You would want to use file path ordering when you want to group work together based on when its done, but do not want to restrict your folder structure. 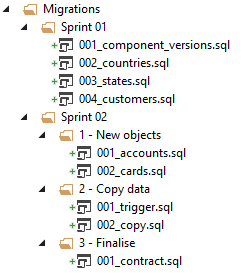 Here it is easy to visualize how your scripts will be executed as it is the same order as they appear in the solution explorer.

In situations where scripts are likely to be reordered or generated in locations other than the end, using sub-folders can help, as new scripts can easily be added at the end of any folder.

Note that file prefixes need not be unique so scripts can also be inserted into earlier locations within a folder without renaming all scripts which follow.

The main reason why you may want to use semantic version ordering in your projects is for release planning. For example, say your organization uses the convention of branching by release. Each release branch is given a unique reference number (e.g. RL123), which can be used to look up the release in a change management/control system.

This value is appended to the version number, which is incremented within the major/minor/patch format.

The PreRelease and Build parts are optional. 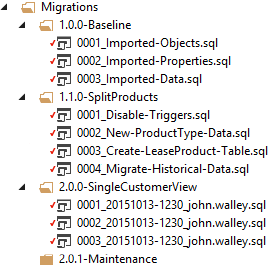 This allows you to group migrations by what they are doing, rather than the order they are going to run.

Scripts will be ordered by file name, regardless of the folder they are in.