Using a baseline for comparison

Baselines are only used for comparing time ranges in SQL Monitor 3.5.

For information about comparing in SQL Monitor 3.3 and 3.4, see Comparing time ranges.

For information about comparing in SQL Monitor 3.2 and earlier, see Analyzing metric data.

Once you've chosen the metric activity you're interested in, you can compare it with what was happening during earlier time ranges to identify unusual patterns of behavior.

To change the duration used for comparison, select from the Time range drop-down list. The dates and times of the baseline are updated accordingly, but you can also change them using the Compare with drop-down menu, date/time pickers, or paging buttons.

You can also set a custom time range by using the mouse wheel to zoom in and out of the graph.

In this example, data collected between 10am and 11am is compared with the same hour 24 hours earlier. Each hour is shown as a line on the graph, with the earlier time range displayed in a lighter shade:

To remove the baseline from the graph, click the

After comparing with a single time range, you can extend the comparison to show what was happening during additional previous time ranges. To do this, click the Extend baseline button and move the slider to the left or right to change the number of lines displayed on the graph.

By default, the slider is set to compare 7 previous time ranges. If there isn't enough data to show the number of time ranges set by the slider, the graph will show as many lines as it can and a message is displayed:

If this happens, move the slider to the left. The message will disappear once the slider setting matches the number of lines displayed on the graph.

SQL Monitor can only show data that's currently stored in the Data Repository. Data from an earlier time range can't be included in the baseline if it's already been purged, if the object you're monitoring was unavailable or suspended, or if SQL Monitor wasn't running at that time. 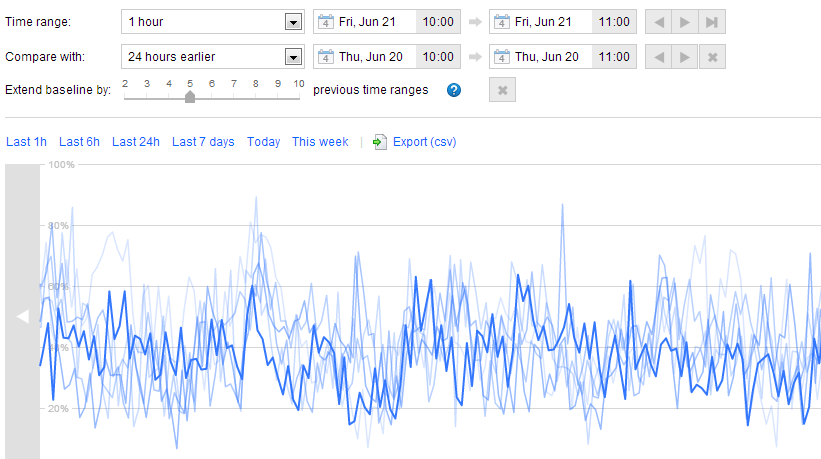 The faintest line displayed represents the time range furthest back in time: the stronger the line, the more recently that data was collected.

Comparison data on the graph can be displayed as either lines or regions. The lines view is displayed by default; this makes it easier to compare individual data points across time ranges.

Move your mouse pointer over a data point to check the exact time at which the value was collected. 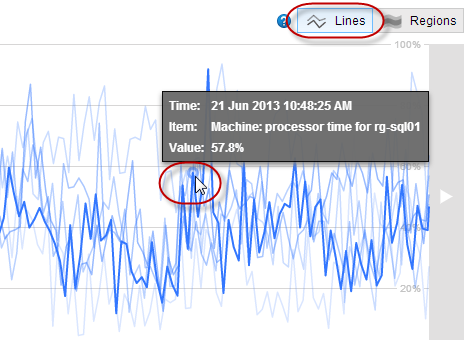 Click Regions to compare the latest time range against lines aggregated into shaded areas. The regions show where metric activity took place between the minimum and maximum data values reached, and make it easier to spot the most common areas of activity: 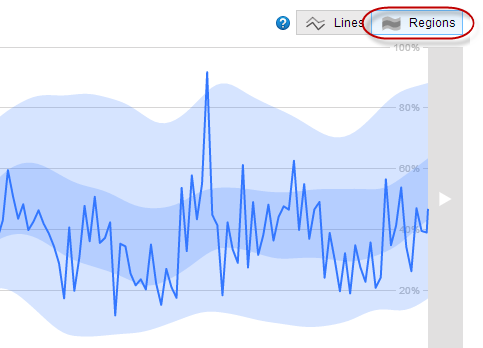