Sometimes it is necessary to anonymize the values in the columns of tables which form the join keys between those tables. This type of masking and synchronization requirement can be problematic when done manually since both the masking and synchronization operations have to be performed at the same time. If the classic Substitution and Table-To-Table sync method is used the Table-To-Table rule will fail because the join keys are no longer identical due to the masking operations of the Substitution rule. The diagram below illustrates this concept: 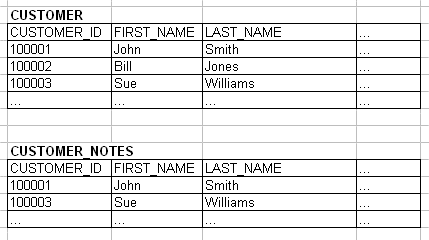 Two tables which require the CUSTOMER_ID field to be masked 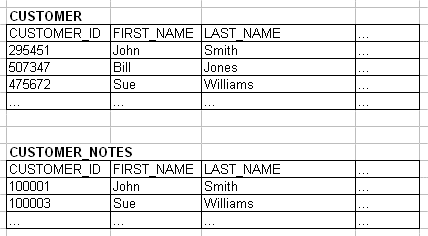 After substitution the synchronization cannot happen

After a simple substitution operation the changes to the CUSTOMER_ID field in the CUSTOMER table cannot be synchronized to the column in the CUSTOMER_NOTES table. The join keys have been changed and there is no longer any way to know which records in the two tables are associated with each other. 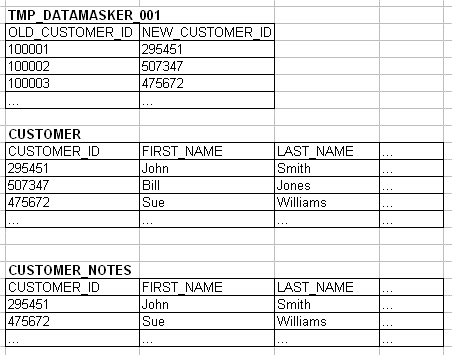 The build of a correlation table enables the masking to proceed

One way to achieve the desired result is to build a temporary table, known as a correlation table, which contains copies of the before and after values of the column to be masked. The generation the new column values takes place in the correlation table and then Table-to-Table rules can be used to fan the changes out to the targets. The synchronization can take place since the new value of each existing CUSTOMER_ID is known. Once the correlation table is built it then becomes a relatively simple procedure to examine each row in the CUSTOMER and CUSTOMER_NOTES table, lookup each CUSTOMER_ID value in the OLD_CUSTOMER_ID column, find the associated NEW_CUSTOMER_ID and perform the update. Once the operation has been performed on both tables the CUSTOMER_ID values will be both modified and synchronized even though it is a join key. At that time the temporary correlation table must be dropped for security reasons since it forms a lookup mechanism between the new values and the old values.

The above description forms the basic requirements needed to mask data in columns which form a join key between multiple tables. There are several other complexities which need to be considered. 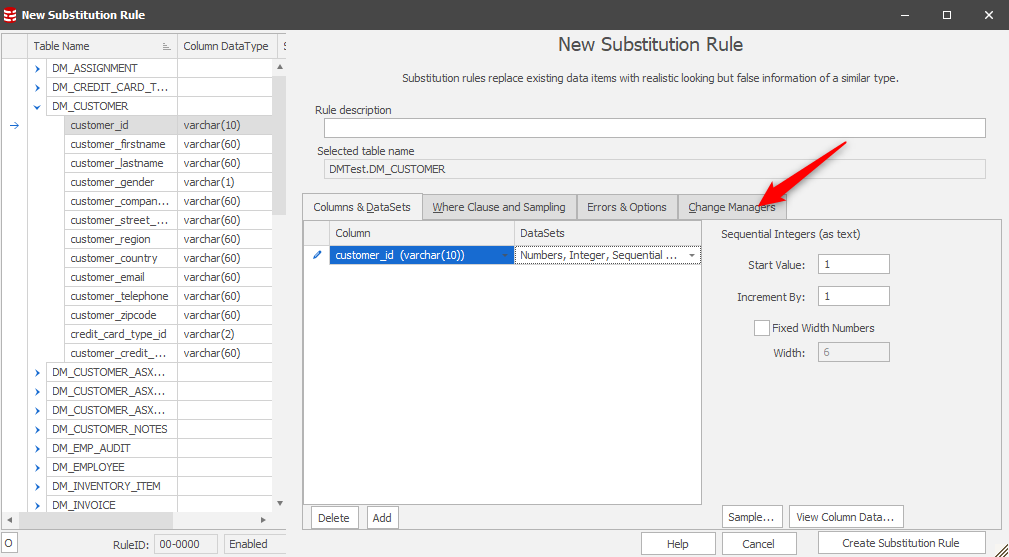 The location of the Change Managers tab on a Substitution rule

Once converted, the new Sync. Manager rule will be visible in the rule display with the same rule number.

The Substitution rule has changed to a Sync. Manager rule

At this point secondary fan out tables (those that will also be synchronized) can be included in the rule using the tools on the Rule Generation by FK and Tools and Options tabs.

The PFKF Change Manager rule can be enabled, disabled or run manually like any other rule. The rules it contains will execute in parallel according to their own internal rule blocks. The Edit Sync. Manager rule form has more details on the configuration of Sync. Manager rules.

If you have a custom WHERE clause on a Substitution rule which is converted into a Sync. Manager rule, you need to add [DMTGT] alias in front of all the columns in WHERE clause. e.g. [CUSTOMER_ID] IS NOT NULL should be [DMTGT].[CUSTOMER_ID] IS NOT NULL. This alias is needed because of the temporary table creation with the same column names in the target table to run Sync. Manager rule.