To embed dependencies, in the Project Settings window, go to Dependencies Embedding or click the icon in the toolbar.

When dependencies embedding is enabled, the colored bars under the toolbar icon and to the left of the features options are green. If it is disabled, the bars are orange. 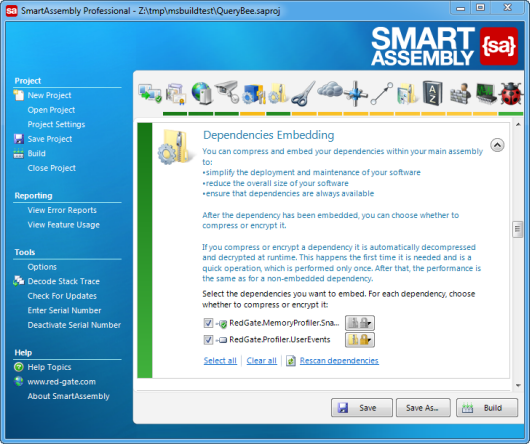 Compression and encryption of dependencies

When you enable dependencies embedding, you can also choose to compress and/or encrypt the embedded dependencies. Click the

icon next to each dependency in the list to choose whether to compress or encrypt that dependency.

The following example shows code before and after embedding DLL1 and DLL2 in MainExe:

What is the difference between merging and embedding?

When you merge a dependency with the main assembly, the code from the two assemblies are merged into a single assembly. The resulting assembly does not contain a reference to the dependency. Calls are no longer public (by name) but internal (by member ID), which provides greater protection and is quicker.

You can protect a merged dependency by obfuscating the whole assembly in the normal way.

At runtime, the first time the DLL is needed, it is unencrypted and decompressed (if applicable) and then an assembly is created and loaded into memory. The embedded assembly keeps its identity and its integrity.

To protect the dependency, first protect it in a separate SmartAssembly project and then embed the obfuscated DLL.