The network configuration described below is a working example of how SQL Monitor has been deployed by John Henderson, DBA and Senior Programmer at Smith Travel Research (STR). 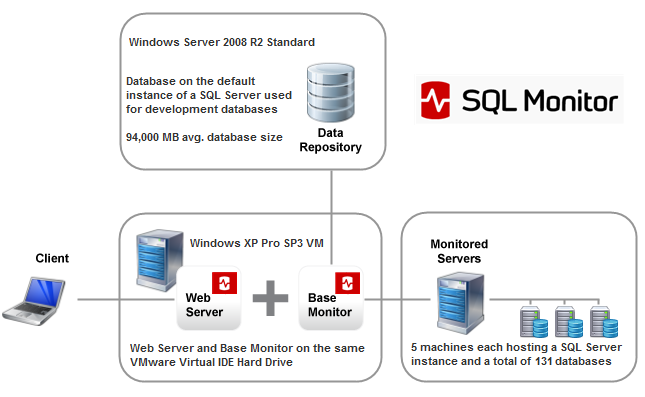 Base Monitor and Web Server configuration

The Base Monitor runs the service that monitors your machines and instances. The Web Server delivers the pages for the SQL Monitor web interface. In this configuration, the Web Server and Base Monitor are on the same VMware Virtual IDE hard drive of a machine running Windows XP Pro SP3 VM with .NET 3.5 SP1 installed.

The Base Monitor service uses default TCP port 7399 to communicate with the Web Server.

The Data Repository is an MS SQL Server database that stores the data collected by the Base Monitor service. In this configuration, the Data Repository database runs as the default instance on a MS SQL Server 2005 64-bit (x64) Enterprise database. The machine is running Windows Server 2008 R2 Standard with .NET version 2.0 to 4.0 installed. There are other development databases hosted on this machine, but there is sufficient memory and processor capacity to accommodate this:

This configuration contains five machines each hosting a SQL Server instance with a total of 131 databases across all instances. A breakdown of machines, instances and databases being monitored is as follows:

One of the machine is in a DMZ, so there is a firewall between it and the Base Monitor. TCP ports 135, 445 and 1433 have been opened to allow remote file access and WMI access.

The following metrics obtained from SQL Monitor’s Analysis page give an idea of how busy the SQL Server instances are on average in this network for the last 30 days.

The average metrics for each instance are:

Trace data collection is enabled and used to track down potential causes of blocks and long running queries, and for general troubleshooting.

Finally, the DBA wants to do 90 days’ worth of trending, but they need to make sure that the Data Repository growth rate does not impact performance. The purge settings have been customized as follows: