This section reviews the components of the SQL Clone architecture and their roles. For reasons discussed in detail in How SQL Clone Works, SQL Clone relies on the following in order to function correctly and perform reliably:

Without 1-3, SQL Clone may not perform optimally, because it relies on Microsoft VM technologies that assume them. Without 4, SQL Clone will not work.

SQL Clone has several different components. The following diagram depicts a typical SQL Clone network installation, although for a proof of concept, you can simply install all SQL Clone components on a single machine: 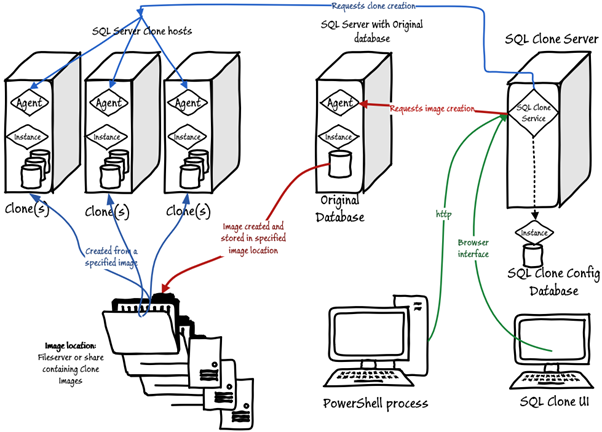 SQL Clone Server is the machine on which you install SQL Clone, and runs the SQL Clone service. It coordinates with, and supervises, the SQL Clone Agents over the network.

One or more machines running SQL Server, which participate in the SQL Clone service by hosting databases that are the source of images, or hosting clones, or both. The diagram, in this case, depicts a live database as the source of an image, but it can equally be a database backup, in which case it requires a SQL Server instance, with an installed SQL Clone Agent that can read the backup files, to facilitate the restore operation.

SQL Clone Agents must be installed on every machine hosting a SQL Server instance that participates in the Clone service. An Agent is a Windows service that deals with all SQL Clone tasks on a specific machine (creating and removing images and clones, and so on).

Image location. There will be at least one Network file share ­to store the image files that are the source for the clones and so of course all the Agents will need to permission to access it.

In addition to this documentation, the Redgate Hub offers the following resources to help you prepare for SQL Clone.