If a user is not granted access to an image,

If a user is not granted access to an instance,

When creating an image, a user can select which of their teams to place their image into.

The teams feature starts disabled. To enable it, go to the Permissions page within Settings, and go to the Teams tab. When you first enable teams, only administrators will have access to Clone until you place your users into teams. 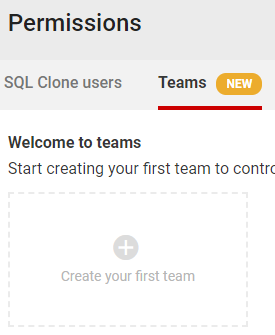 Click 'Create your first team'. You can name teams anything you like. Once you have created the team, click on its team card to add users, images, and instances to it.

You can either select specific users, images, and instances to be part of this team, or you can click the 'All users', 'All images', or 'All instances' checkboxes to include all such resources in this team instead of selecting them one by one. If you select these checkboxes, they will always include all of these resources, and you won't need to add new items manually. You can uncheck them at any time to go back to selecting specific resources for that team.

You can delete teams at any time. This won't delete their users, images, or instances, and it won't increase any user's access.

You can also disable the teams feature as whole at any time. Disabling the feature will remove any restrictions that teams were imposing - all users will be able to access all resources. Any role-based permissions you have created in the users tab will still apply.