If you're interested in the various techniques for seeding your database in general, see Seed Data.

One thing to consider when source-controlling your database is how to maintain static/lookup data within your project.

This can include data that is needed by the calling application to work such as zip/postal codes, country lists or even application settings.

You can choose to use either the online or offline editing approaches above, or a combination of both, in the one SQL Change Automation project.

If you're looking to seed a table with a larger amount of data (10,000+ rows) then you may find that the approaches outlined in this article unsuitable, as performing INSERT operations with literal values does not tend to scale very well. For larger data sets, we recommend including a seed file in your project and using the BULK INSERT statement to upload the data. Read more about using the BULK INSERT method.

This allows you to edit table data in an online manner, e.g. with SQL Server Management Studio, and then import changes back into your SQL Change Automation project to generate INSERT/UPDATE/DELETE statements within a new migration.

To mark a table for data tracking:

You can now preview and import data from the specified tables.

When choosing tables to track for data changes, it is important to bear in mind that SQL Change Automation is optimized for working with smaller sets of static data (< 1MB table size). This is to ensure that your projects always build quickly, as larger datasets can produce a significant amount T-SQL code which can cause performance issues during project build/deployment.

A warning will display within the SQL Change Automation tool-window if a static data table exceeds 1MB.

For larger data sets, we recommend using the data seed method with BULK INSERT instead.

Please note that SQL Change Automation's static data tracking is not currently supported within the drift correction feature, so the drift report will not report on any data differences. Likewise, the deployment preview feature which shows object-level changes that are pending deployment (e.g. in Octopus / Azure DevOps), does not yet support the previewing of data changes.

Editing offline means that you start by preparing a data change script before actually deploying the changes to the database.

In this example, we'll use the MERGE statement to manage the deployment of our static data. What makes MERGE so useful is not only its ability to insert, update or delete data in one succinct, atomic operation but also the fact that the statements are re-runnable. This allow for the source script to be edited and re-used for deployment to all target environments. It also gives you the ability to include SQLCMD variables in place of literal values, allowing you to centralize the deployment of configuration data.

To generate MERGE statements, we will use the sp_generate_merge stored procedure utility. The script that is generated from the utility can be pasted into a Post-Deployment script in your SQL Change Automation project, as explained below.

Limitations of the offline method

There are a few draw-backs of the offline method to consider prior to selecting this approach:

If you foresee that these limitations may be problematic for your deployments, then it may be worth considering the online approach to source controlling your static data instead.

Download the sp_generate_merge" stored procedure from GitHub. Install it by simply running the script on your development SQL Server instance. This will install the utility as a system procedure within the [master] database so that it can be used within all of your user databases.

Note that you do not need to add this script to your SQL Change Automation project, nor do you need to deploy the stored procedure to any server other than your Development environment.

In this step we'll generate a single MERGE statement containing all the records from the "Sales" table.

Firstly, open SQL Server Management Studio and connect to your development database server and ensure that your SQL client is configured to send results to grid, rather than text.

Execute the stored procedure, providing the source table name as a parameter. If your table is in a non-default schema, be sure to supply the @schema parameter with its name.

Click the hyperlink in the result set to open up the Xml fragment in a new document window. 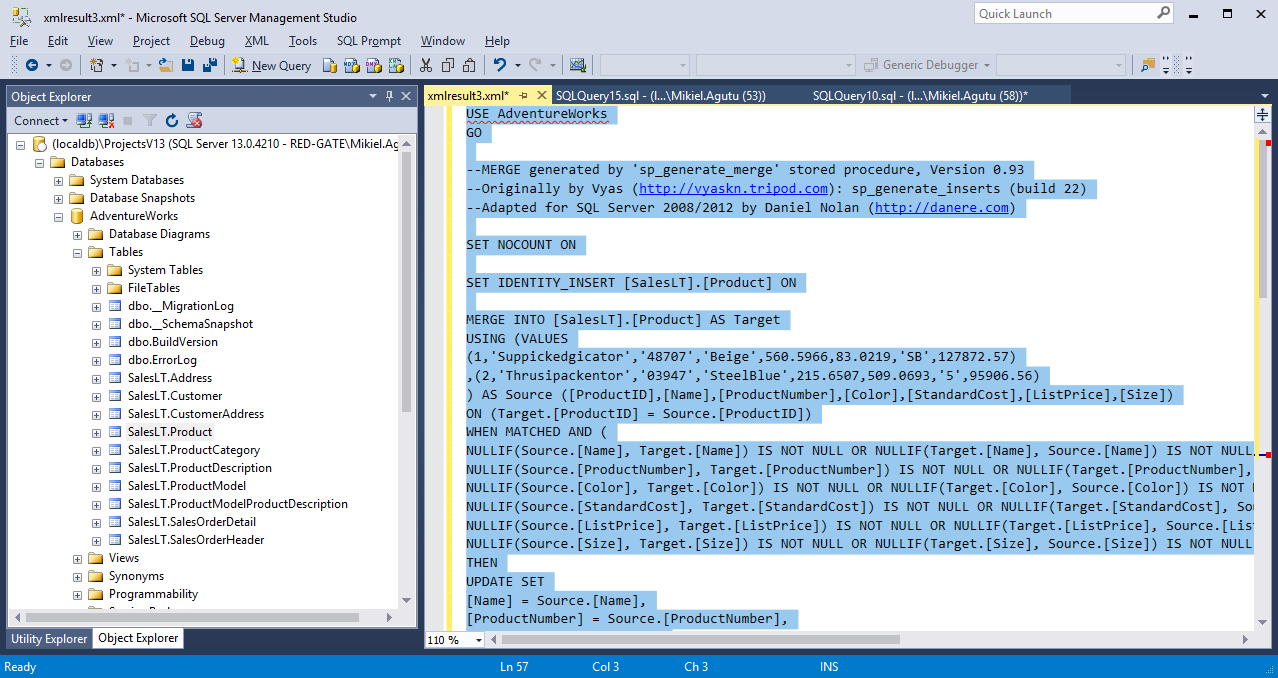 Delete the XML tags, then copy the document contents to the clipboard and switch back to Visual Studio.

In the next step we'll create a script to be executed during each deployment which will ensure that the table is always in-sync.

Add a deployment script to your project 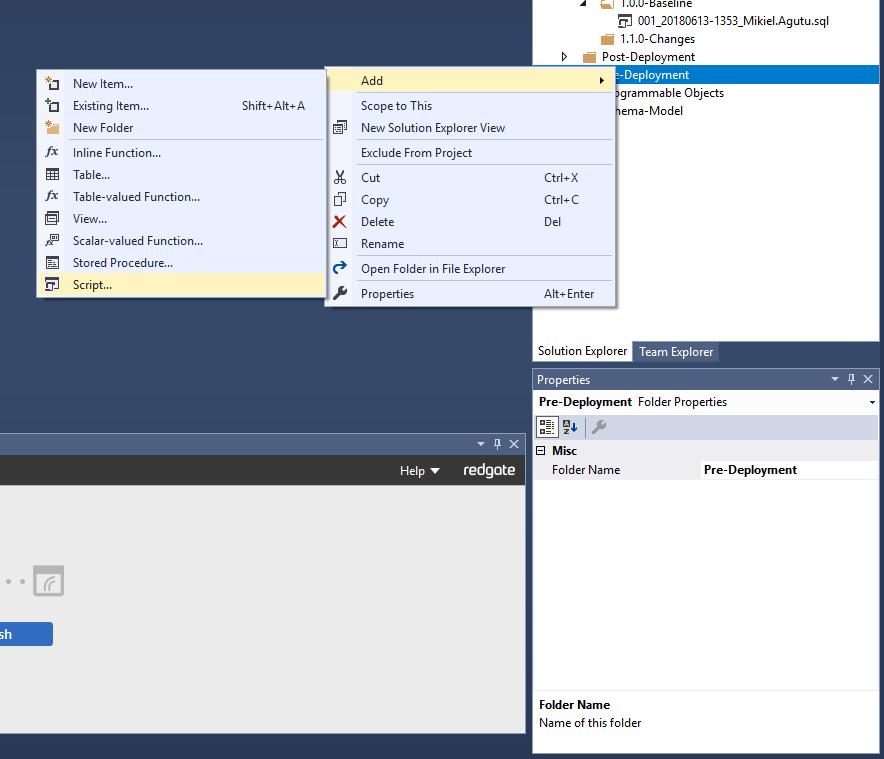 Right-click the Post-Deployment sub-folder and select Add... Script. In the New Script dialog, select the Script (Not In Build) template and specify a name that includes the next sequential number, eg. 01_Populate_Region_Data.sql.

Naming your Pre/Post-Deployment scripts in this way isn't mandatory for your project to build, however we recommend sequentially numbering your scripts to make it easier to explicitly define the order of execution. This is particularly important if there are interdependencies between your static data tables.

Paste the SQL copied in the previous step into the newly created script file.

With the benefit of syntax highlighting, we can now take a bit more of a closer look at what is going on in the generated script: 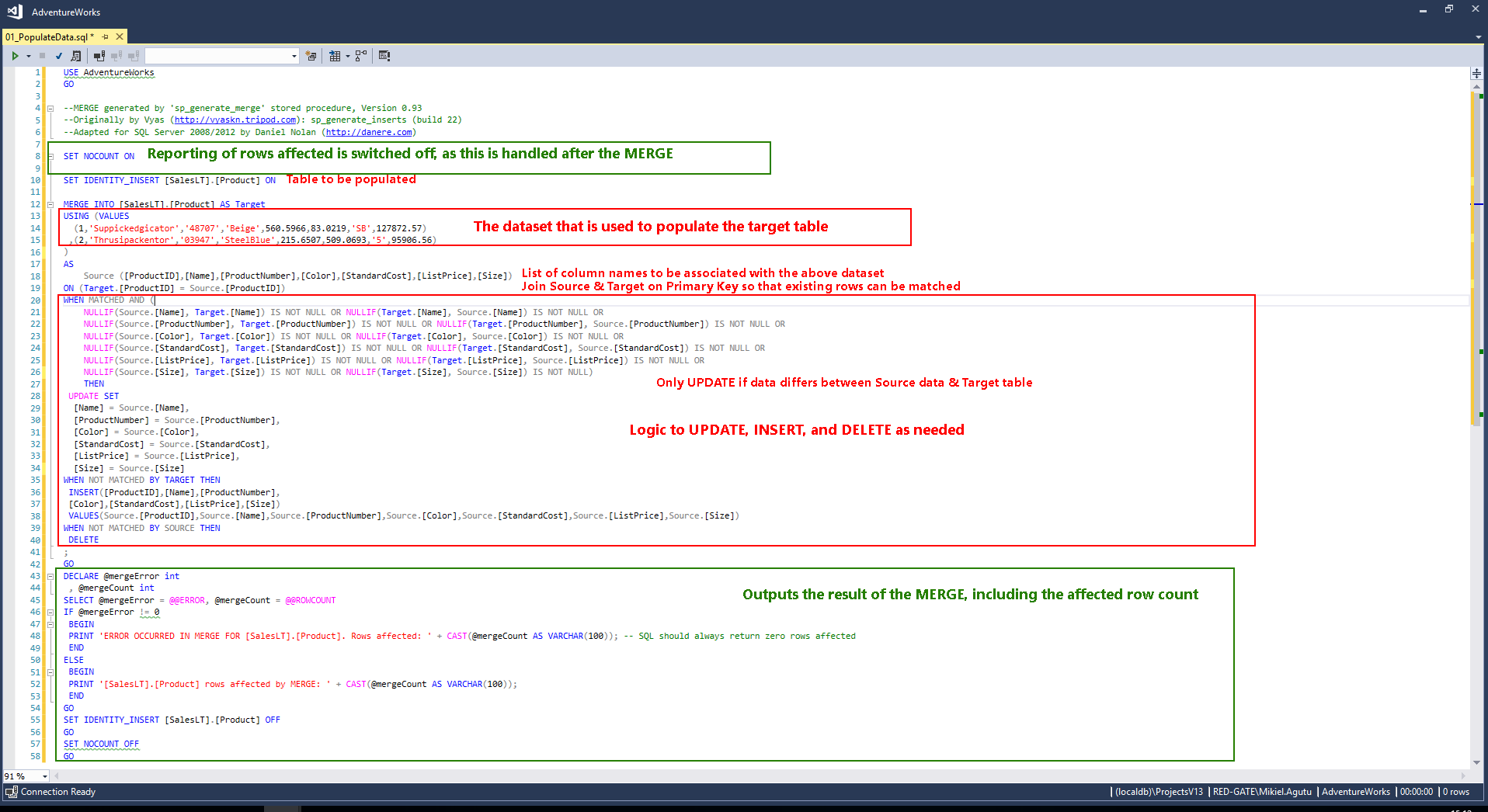 To test your new script, deploy your SQL Change Automation project to your development SQL Server (Build... Deploy Solution). The Output window should display results similar to below:

To see how the script can be re-used to repeatedly deploy changes in your static data, try making changes to the data in the script and re-run the deployment. The rows affected by the MERGE should reflect your additions and modifications to the file.

If you prefer to initiate changes to data by editing the table data directly in SSMS, you can do so by simply re-running the sp_generate_merge procedure after making changes to the live data. Copy+Paste the generated code as you did in the previous steps to update your Post-Deployment script with the new changes.

Using the offline method outlined above gives you the ability to include SQLCMD variables in place of literal values, allowing data from the deployment system to be passed in and stored within your tables  (e.g. environment-specific variables from Octopus).

This means you could use your deployment system to centralize the storage of configuration settings, giving you a systematic and repeatable process for propagating updates to configuration data.