How SQL Source Control works behind the scenes

You don't need to read this page to use and understand SQL Source Control, but it might be helpful for troubleshooting, or if you're just curious.

However, SQL Source Control doesn't just run comparisons between the database and the scripts folder in your source control system. This wouldn't capture all the information needed to track database changes. For example:

To solve this problem, SQL Source Control keeps track of three separate versions of the database:

When you visit the Commit tab or the Get latest tab, or click Refresh, SQL Source Control runs three comparisons using the SQL Compare engine. It uses the results of these three comparisons to create the list of changes. 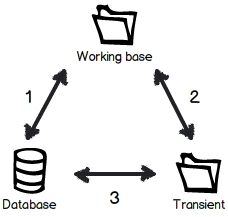 2: Identifying changes to get

When you visit the Commit or Get latest tab, SQL Source Control runs comparisons 1 and 2 and checks the lists of changes against each other. If the same object appears in both lists, it means another user has committed a change to source control on an object you've changed locally.

At this point, one of two things may have happened: a conflict, or a no-op. To determine which, SQL Source Control runs a comparison between the transient and the database.

Possibility 1: you and someone else have changed the same object in different ways (conflict)

If the object isn't the same in the transient and the database, this change is a conflict. You can choose to resolve the conflict by applying the source control version to your database ("Take theirs"), or overwrite the version in source control with your own version ("Keep mine").

Possibility 2: you and someone else have made the same change to the object (no-op)