A team of developers can work on and test features in different branches of a SQL Server database development project, while SQL Clone automatically generates clones of each branch, for their local development work, and automatically keeps each clone 'synchronized' with the current branch in version control.

This automation requires use of SQL Change Automation and Git hooks, as well as SQL Clone.

In order to work on and test databases for different branches of work, in source control, it requires the developer to create multiple local copies of the database, in development, each one named differently, according to the branch for which it was created. In the scheme suggested in Using clones for branch-based development and testing, the team create a clone for each branch, named according to that branch. To switch branches requires creating a fresh clone of the current build then running on it the migration script for that branch. It would also require care to ensure that each clone's changes always went to the correct branch in source control.

In SQL Change Automation (SCA), the logical connection from the SCA project in the source control repository, to the development database is defined by the database name. If your project is connected to the main branch (with an associated clone called MyClone), and then you switch to the Hotfix branch (with a clone called MyClone_Hoffix), the SCA project will now reflect the Hotfix branch but it will still be connected to the clone for main, meaning the branch and its database are out-of-sync.

How to get started with automatic branch switching

You can find a full demo of how it works in the following Redgate Product Learning article: Getting Started with Automatic Database Branch Switching.

You can find all the setup details here: Git hooks. Briefly, it relies on a simple Git hook called post-checkout, which is invoked immediately after the Git checkout command is issued, to switch to a different branch, or to create a new branch and switch to it, in a single step. The hook script simply opens a PowerShell session and executes a clone-branch.ps1 script, which we also provide. This PowerShell script uses the SQL Clone API to create a dedicated development database, a clone (called MyClone, say), specifically for the current branch (main, for example). It applies any commits in that branch that don’t exist in the clone, so that it represents the exact state of the branch. 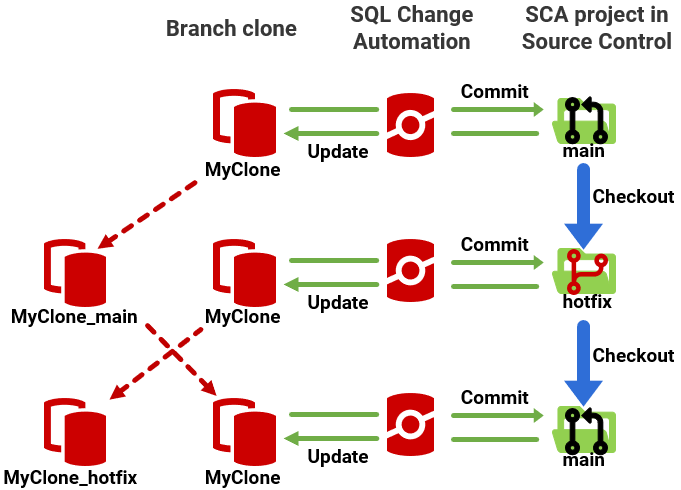