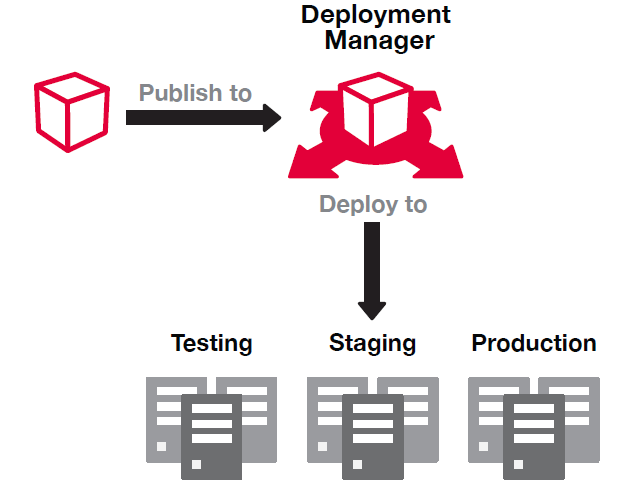 When we say package, we really just mean a .zip file with a small manifest describing the contents. A package consists of all of the files needed by the application (for example, executables, DLLs, configuration files, CSS files, and so on). Deployment Manager uses the NuGet file format, created by Microsoft and used by Visual Studio.

The target machines are your web servers, application servers, database servers, and any other server on which you want to deploy your software. On them, you install a Windows service called the Agent.

Communication between a Deployment Manager server and an Agent is always encrypted using a trust relationship based on public/private key cryptography. That makes it secure enough to use on production machines in the cloud or in remote data centers. In fact, machines don't even have to be on the same Active Directory domain - a common scenario is to run Deployment Manager on a local machine within your enterprise, but to have it deploying software to remote machines in the cloud.

Thus, the three main components that make up an Deployment Manager installation are:

Installing and setting up Deployment Manager

Now that we have the background out of the way, let's install Deployment Manager. The steps are: